About 66 million years ago, just after the great extinction of the dinosaurs, the dominant climate in the Iberian Peninsula was of the subtropical type. At that time, commonly called Tertiary, the vegetation was very different from the current one. Here dominated plants of evergreen leaves, broad and glossy (of the Laurissilva type), adapted to an always hot and humid climate.

However, a few million years ago, the climate of Iberian Peninsula began to gradually cool down and to have a drier season – the summer (characteristics of the Mediterranean climate). Without adaptations that would allow them to survive this new climate, the subtropical plants were disappearing and progressively replaced by others from Mediterranean type, similar to the one we all know today. However, refugees in very special places in the Southwest of the Iberian Peninsula, some of those ancient plants still bear witness to the weather of the past (the so-called relics of the Tertiary).

The Rhododendron of Monchique

Rhododendron ponticum subp. baeticumt is a plant of ancient origin and one of the best examples of relic species that remain in the Iberian Peninsula.

Rhododendron ponticum it is a plant that evolved during the Tertiary period and that once had a wide and continuous distribution in the south of the European continent. However, with the climatic cooling and the progressive installation of the Mediterranean climate, it disappeared, remaining only in some refuges of the Iberian Peninsula, Black Sea Coast and Lebanon.

Isolated from other refuges, plants in the Iberian Peninsula have evolved and differentiated themselves from plants in Eastern Europe. This isolation gave rise to the subspecies baeticum, a plant that we now know as Rhododendron, and which is a rare and endemic plant in the Iberian Southwest.

Rhododendron is a very rare plant, which only exists in some Portuguese and Spanish mountains. In Portugal, it has only two disjunct populations, one in the Monchique area and the other in Caramulo. In Spain, it has its last refuge in the mountains of Aljibe (in the south of Spain – Andalusia).

It is a plant of the same family of the heather (Ericaceae family). It is a perennial and evergreen shrub, which can reach 3 m in height. The flowers are very showy and large, between bright pink and lilac, with orange streaks, meeting in inflorescences composed of 7 to 21 flowers. Flowering occurs between May and July (occasionally also in autumn). The fruits are narrow and oblong woody capsules with 2 to 3 cm, which open during autumn-winter.

Each individual produces countless small seeds (<1mm) annually, easily dispersed by the wind. Despite this, natural regeneration is currently scarce and juveniles are practically absent in Rhododendrons. This is due to the lack of adequate climatic conditions for the installation of new seedlings. Thus, nowaday, the expansion of populations is ensured almost exclusively by vegetative reproduction.

Detail of the landscape with Rhododendron ponticum subsp. baeticum)

Detail of the fruits of Rhododendron ponticum subsp. baeticum

Detail of the open fruits of Rhododendron ponticum subsp. baeticum 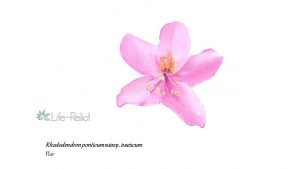 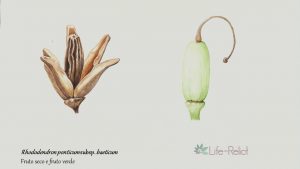 Rhododendrons are found in mountainous areas, in relatively hot and humid climates, with a high oceanic influence, where frost is non-existent. Globally, they occur spontaneously in two distinct ecological positions: on the banks of water courses (riparian position); and in borders or under-covered forests of Quercus canarienses. In both cases, they are always located in acidic and moist soils.

Rhododendrons provide environmental services of high relevance to human well-being, such as: they help to protect the soil, minimizing erosion; contribute to soil formation; they are a refuge for other species of flora and fauna; they constitute an enormous source of aesthetic, artistic, cultural, spiritual and historical information; and genetic resources are important. Additionally, they are an extremely important habitat for education and science. 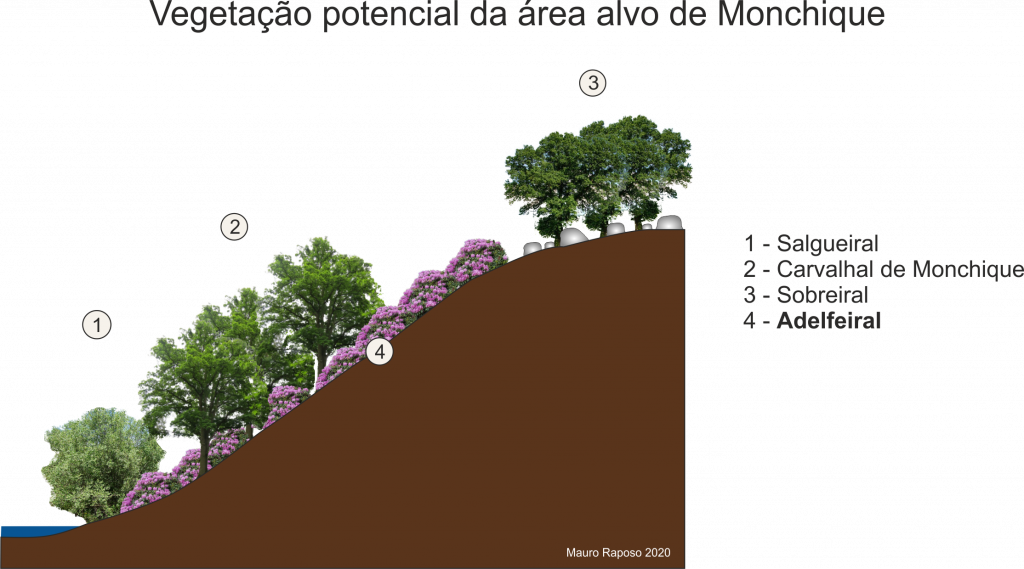 Rhododendron ponticum was introduced to the British Isles in the 18th century, where it became an invasive alien species. Genetic studies have revealed that the ancestor of the British Isles is from the Iberian Peninsula. However, recent works indicate that the environmental requirements of native Iberian plants and invasive plants in the British Isles are very different. This situation suggests that, at some point, the Iberian ancestors may have hybridized with another close relative (another species of Rhododendron), resulting in a highly competitive plant, capable of invading new niches.